Is Coconut Oil Healthy? A Look at the Research

< back to blog home

I think we’ve all heard some magical claims about coconut oil.

It seems that everywhere you turn, someone and their mother is touting its fat-melting, anti-inflammatory, going-to-make-or-break-your-health kind of effects.

But what's the truth? I did a deep dive into the latest research to find out. 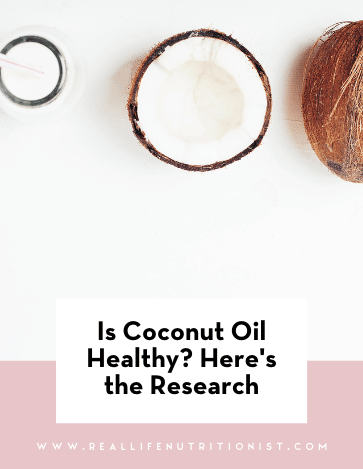 Why it's sometimes considered a health food

Well, like most things in the world of nutrition, things sprouted from a shred of truth. Let's start with some chemistry, shall we?

Coconut oil is, well, an oil. More specifically, it’s a fat. And it’s 100% fat (in other words, there is not a trace of carbohydrate or protein in its chemical makeup).

Unlike other common cooking oils such as olive oil or avocado oil, coconut oil is mainly classified as a saturated fat. This is what makes it solid at room temperature!

You might be thinking, “aren’t saturated fats ‘bad' for you?!”

And my friend, you’d be right! While I don’t think categorizing foods as good or bad is particularly helpful, saturated fat is generally something we want to limit. Although not all food sources of saturated fat have the same effects, research indicates that dietary saturated fats may increase LDL or ‘bad’ blood cholesterol and increase risk of heart disease and stroke.

So if it's so high in saturated fat, why is it thought to be a superfood? Well, that’s where MCFA’s come in!

Coconut oil is largely made up of a 12-carbon fatty acid called lauric acid.

Without getting too deep into the science, this chemical composition makes lauric acid somewhat unique. Because of the length of its carbon-chain, lauric acid is chemically categorized as a compound called a medium-chain fatty acid or "MCFA".

What makes MCFAs unique is that they are smaller than the long-chain fatty acids that make up many other oils! This small size means that MCFAs bypass the traditional metabolism of longer-chain fatty acids, undergoing faster absorption and easier metabolism.

In other words, MCFAs have fewer opportunities to be stored as fat in the body. The research on MCFAs suggests that they may promote small reductions in body fat, weight circumference and LDL-cholesterol. Pretty freakin' cool!

Well, there are a few! Firstly, the research on MCFAs is still somewhat inconclusive. The latest meta-analyses (the strongest type of evidence available) reveal significant limitations in the research. That is, the way the individual studies were conducted, the types of participants involved, and the length of the studies were too different from one another to be able to make any conclusive claims.

The bigger problem is that coconut oil doesn’t exactly fall into the MCFA category as we once thought.

Although lauric acid, the fat that makes up most of coconut oil, has the chemical makeup of a MCFA, it doesn’t always behave like one! Even more, coconut oil also contains some longer-chain fatty acids that further complicate the way it’s metabolized.

What Health Claims About Coconut Oil Are True?

Is there any good to this oil? Are any of the claims true? Should you be avoiding it?! Let’s dissect these one-by-one by looking at the findings of the latest systematic review and meta-analysis.

Is it good for weight loss?

It doesn’t look like it! When compared to other common cooking oils such as olive and canola oil, coconut oil shows no significant effect on body weight, waist circumference or body fat percentage. And remember, it's still a fat, which is relatively calorie-dense! It offers 120 calories per Tablespoon, so if you’re mixing spoonfuls into your coffee in the hopes of shedding pounds... you may want to think twice!

Is it good for heart health?

The jury’s still out on this one! But the current research actually suggests that coconut oil may increase LDL, HDL and total cholesterol. And it's important to note, the rise in good cholesterol doesn't outweigh the rise in bad cholesterol. The research didn't show it to have any effect on triglycerides compared to other cooking oils. The research is clear that coconut oil can't *lower* risk of cardiovascular disease, but whether or not it increases risk is still unclear.

Will it reduce inflammation?

The research doesn’t really support this claim either. Some small studies suggest that coconut oil may reduce some pro-inflammatory markers, but significantly more research is needed.

Can it stabilize blood sugars?

Like any fat, coconut oil, when consumed alongside a carbohydrate-rich food, can help slow the release of sugars into the bloodstream and minimize a spike in blood sugar. But the research doesn’t show coconut oil to support blood sugar control any differently than other fats and oils.

Should you eat coconut oil?

The claims around this oil are exaggerated at best! Right now, research supports general dietary recommendations to minimize saturated fat in the diet, including coconut oil.

That said, I believe firmly in an 'all foods fit' approach to food and nutrition.

If you enjoy it, coconut oil can absolutely be included in a healthy diet. We all know it adds delicious flavour, especially to Asian-inspired dishes!

However, I wouldn't consider it a health food and I don't recommend making it your main cooking fat. Instead, I would encourage you to opt for heart-healthy oils with stronger evidence behind them, such as olive oil (my personal favourite!), avocado oil or even canola!

If you have any questions about this blog post or want to learn how to find your happy weight without dieting, connect with me on Instagram or apply to work with me.