< back to blog home

Oof! This is a big topic... but important. And I've been hesitant to tackle it because there's a lot to consider, a lot of nuance, and a loooot of misinformation. Even finding a universal definition of "organic" is a challenge, because what defines organic products is different between countries and states.

I'm not one to back down from a challenge, but I would like to keep today's discussion focused and relevant to my area of expertise. I'm not a food scientist. So, I won't be going into intense detail about production practices or environmental considerations.

But I will be honing in on three big areas: nutrition, safety and cost. Together, we'll explore the reality of the research about organic vs. conventional foods, what I recommend, and how you can keep yourself and your family safe and healthy.

What is organic food?

To evaluate organic foods, we have to start by defining them.

The term has slightly different meanings in different countries, so I'll be sticking to my hood: Canada. Here, the term "organic" refers to foods that meet the Canadian Organic Standards. These standards are enforced and monitored by a branch of the Canadian Federal government called the Canadian Food Inspection Agency.

While it can seem like the term organic is used loosely (sometimes, it is!), foods that meet the Canadian Organic Standards will have an official Canada Organic Logo. And in order to qualify for this, a food must meet very specific limits and prohibitions on various production practices, such as:

I won't be getting into the details of these parameters. Frankly, it's a 63-page document... and as a nutritionist, not a food or agricultural scientist, I don't fully understand the relevance or implications of some of these limitations.

Generally speaking, the intent behind organic food production is to minimize negative impacts on the agro ecosystem, including soil organisms, plants, livestock and people. At its roots, organic production is meant to uphold health, ecology, fairness and environmental care. This is a pursuit I'm sure we can all agree on and support.

But right upfront, I have a few bones to pick.

Something I want to highlight is that conventional food production is not the free-for-all that some organic proponents lead us to believe.

In Canada, there are several government agencies that govern food production to make sure we can access healthy, safe food in grocery stores. The Canadian Food Inspection Agency, the Public Health Agency of Canada, Health Canada, and the Department of Agriculture and Agri-Food, are just a few of the agencies that exist to govern our food systems and protect the health of Canadians, our environment and our economy. This is true for other countries, too.

I'm not saying our agricultural practices are perfect (actually, I think they need a lot of work)... but to say that conventional methods do nothing to support the health of humans and our environment isn't the reality. Not to mention, the research shows that both organic and conventional products have risks. But we'll get into that later.

Not all of these agricultural practices are bad

Pesticides, irradiation, and artificial flavourings sound scary. These are just a few of the practices with strict prohibitions under the Canadian Organic Standards. That's fine, I suppose. But the thing is, these things aren't all bad.

Pesticides, for example, are critical for pest management. Without them, we probably wouldn't enjoy the beautiful, plump, mostly bug-free produce we see in grocery stores today. And while there may be health risks when exposure reaches a certain level, this is controlled for and highly regulated in both conventional food production and organic.

The same thing goes for irradiation. It is used to control pathogenic and spoilage microorganisms in food... aka, the bugs that get us sick and make our food go rotten.

Not only is irradiation effective and safe when properly administered... it's already highly regulated under Canada's Food and Drug Administration. In fact, there are only four irradiated foods that are permitted for sale in Canada. So, there's not really much to worry about. And the fact that the Canadian Organic Standards set further limitations, in my opinion, is misleading and irrelevant.

These are just two examples. But the reality is that many of the practices prohibited or limited by organic standards are necessary, safe, and highly governed already.

Okay, let's get to the good stuff.

Is organic food higher in nutrients than conventional? Well, not really.

Before we dive in, I want to acknowledge that there is a lot of variation between individual studies. This is true for most topics, and especially true when it comes to evaluation of organic foods. Some studies support that organic foods have higher micronutrient levels, while others suggest that the nutrient profiles of organic and conventional products are the same. This is why you will find people claiming that organic food is healthier... because there are some studies that seemingly back this up.

That's why it's so important to look at the body of evidence as a whole. Individual studies can't tell us much. So we need to look at systematic reviews and meta-analyses, which collect, interpret and sometimes re-evaluate data in a more holistic and unbiased way. And honestly, even these aren't perfect.

A 2012 systematic review published in the Annals of Internal Medicine looked at 12 human studies and found that there were minimal differences in nutrient composition between organic and conventional foods. And this held true for plant products, such as fruits and vegetables, and animal products, such as chicken, milk and eggs. The one exception is that organic produce may contain higher levels of phosphorous... And I wouldn't say that alone makes it worth the switch.

Another 2012 meta analysis found that organic dairy had significantly higher levels of protein, higher levels of omega-3 fatty acids, and a more favourable ratio of omega 3:6. This was attributed to differences in feeding regimes on the farms. And it was confirmed in another, more recent systematic review and meta analysis... However, this more recent publication also found lower levels of iodine and selenium in organic milk. So you can see how things get complicated.

With the current state of the evidence, we can't say whether organic food is more nutritious than conventional. Certainly with plant products and meat, the evidence simply isn't strong enough to draw any conclusions.

But what we can say with certainty is that this is an area that needs a lot more research.

Interestingly, this systematic review also examined blood and urine antioxidant levels and immune system markers between people consuming organic vs conventional diets. They found that there was no consistent different between blood or urine levels of carotenoids, polyphenols, vitamin E, vitamin C, LDL (aka ,"bad") cholesterol, antioxidant activity or even semen quality between these two groups.

In other words, human health doesn't seem to be impacted by whether you consume organic or conventional foods. But again, a lot more research is needed. And this particular area of evidence is hard to implement and evaluate because there are just so many confounding factors at play.

The answer to this is also a little complicated. But in a word: no.

The review found that organic produce had a 30% lower risk of contamination from pesticide residues than conventional produce. That sounds scary, I know. But (and this is a BIG "but"), the difference in risk of pesticide contamination that exceeds acceptable limits was minimal.

What this means is that both organic and conventional produce have equal likelihood of remaining within safe pesticide limits. This is what matters most.

The authors noted that there were so many differences between the studies included in this review, that all results should be interpreted with caution. Methods, organic standards, and production practices all varied greatly between individual studies. So more research is definitely needed.

How much more expensive is organic food?

It's no secret that organic foods often cost more than conventional.

Why? According to the Canadian Organic Growers, this different in price reflects a difference in labour intensity and volume. They state, "the costs of organic production are often high because organic farming practices are labour-intensive. Also, organic products are grown, processed, packaged and sold at smaller volumes than non-organic foods and often on smaller farms. As a result, economies of scale cannot be realized."

A 2019 consumer report examined exactly what that difference in price entails. Some highlights of what they found:

They found that in the United States, organic foods are on average 47% more expensive than conventional. And given what I see in Canadian grocery stores, this likely holds true across borders. That is a significant difference and not something most can afford to take lightly! 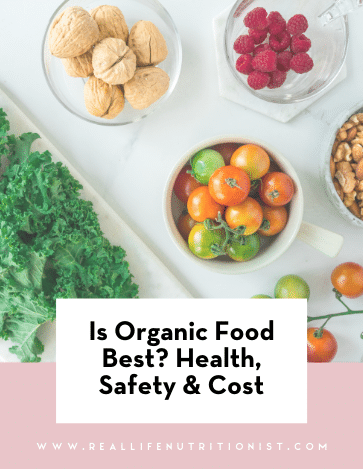 We all have the right to choose what works best! I'm just here to give you the information you need to make a confident decision.

But given the state of the evidence, here are my thoughts:

As for me? I'm just not fully convinced! But I will continue to keep an open mind as the research evolves. I do not currently purchase organic products, and I don't plan on making the switch any time soon.

Here are some less costly alternatives

It's smart to care about your food and where it comes from. But shopping organic isn't the only way to do that! Here are some alternatives:

There's a lot of fear around conventional agriculture. And there are a lot of organic proponents that perpetuate this fear and who create a lot of guilt for those who don't buy organic.

The reality is that organic foods are a lot more expensive, equally as safe, and only slightly more nutritious than conventional foods. If you want to purchase organic, that's okay! But if you don't want to empty your pockets for organic products, you can still be perfectly healthy and happy without them.

If you enjoyed this blog post or have any questions, connect with me on Instagram! I share free content there daily to help you ditch diets, love your body, and live a healthful life free of food guilt.

If you want more support in your journey to ditching diets and finding your happy weight, apply to work with me.

Is Coconut Oil Healthy? A Look at the Research »